As stated in the background, Patricians always had more power in Rome than the Plebeians because they were the true desendents of the original people in Rome. Only patricians could become senators and emperors.  So a lot of Patricians shared the rights and responsibilities of the Senate, as they were apart of it. Even though the patricians had more power than the plebeians, they had to be careful. The plebeians had the larger population and could be dangerous if they were angered. To avoid conflict, the patricians gave the plebeians enough rights to make them happy , such as the right to marry patricians or to have financial protection in war , while still keeping most of the power for themselves. 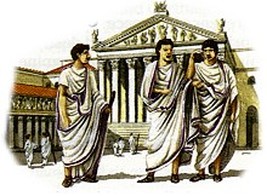 This image was found at Plebeians and Patricians.This is an illustration of the Roman Patricians. I included this picture so readers could compare and contrast what patricians and plebeians looked like to better depict their differences in society.
Responsibilities:
Rights:

Plebeians did not have much power in Rome, even though they made up most of the Roman population. They did fight for more power and rights in Rome, mostly through riots or strikes. In the Conflict of Orders (Roman Republic), the Plebeians refused to fight in the Roman army until they were insured that their land and property would be protected. After the patricians had agreed to this, they joined the army only to find that the agreements had not been kept. After a few occurences like this, Patricians finally created decemviri, so that the people of Rome would understand their rights and laws. Soon after, Rome's Twelve Tables were created. The Twelve tables were a group of people who  created the laws for the different social classes of Rome.They did earn more power this way, however the main leadership in Rome always laid in the patrician class. It was very uncommon for the Plebeians to flourish in politics. 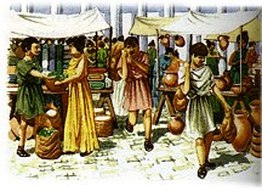 This image was found at Plebeians and Patricians.This is an illustration of the Roman Plebeians.  Notice the differences between the outfitting of the Patricians and the Plebeians. The Patricians definitely were able to wear nicer articles of clothing.
Responsibilities:

Rights:
Plebeians did not have many rights, as they were considered "common folk". However they did strike and petition to change their status and eventually were able to participate in politics.

Plebeians and Patricians had many differences. Their rights and responsibilities, their levels of power, and their populations were very different.  Patricians wanted to keep most of the power for themselves but they needed the Plebeians in order to do it. Working as foot soldiers, Plebeians fought many of Rome's battles and expanded Rome, therefore, expanding the influence Patricians had on people. Plebeians had the larger population, so the Patricians had to be careful to give them some power so that they wouldn't riot or refuse to fight their wars. Patricians in a way were probably resented for their power, and Plebeians were most likely feared by the Patricians for their power in numbers. Being a Plebeian or a Patrician was based on family relations, which is why in the earlier days of Rome, Plebeians and Patricians could not marry each other. Patricians later changed this law to get the Plebeians to fight in their wars. This new law allowed Plebeians to marry into a better social class.
Powered by